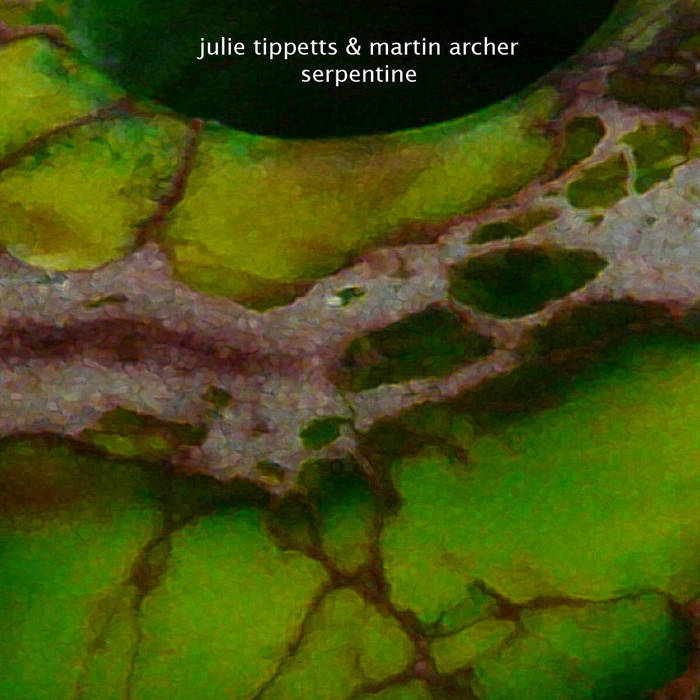 "Serpentine is a strange, dramatic and beautiful record, and it's a real treat for anyone searching for new music that possesses a spirit of adventure and which fits in with absolutely nothing else around. It's also beautifully presented in a way that makes buying a CD a great experience." - Kevin Pearce writes about music on his Your Heart Out blog.


Julie Tippetts, is one of the greatest female vocalists England has ever produced, and over five decades she has produced a small but vital body of work ranging from pop to free improvisation.

My duo with Julie has no desire to repeat itself from album to album. Following on from the poetry and soundscape debut release Ghosts of Gold (2009) and then the complex sprawl of Tales of FiNiN (2011) (both figuring variously in Wire Magazine and Jazzwise best of the year lists), comes the comparatively shorter, stripped down and simplified Serpentine, wherein we revisit (mainly) tonal and rhythmic songforms which enable Julie to explore, at greater length than on our earlier releases, a style of performance at which she naturally excels, and yet which has often been overlooked in favour of her more freeform work of the last 3 or 4 decades. Yes, this is an album of songs, with Julie on powerful rock and soul inspired form throughout.

Lyrically, Julie presents us with images from a teeming menagerie of some of the less lovable examples from the animal world on many of the songs in this collection, as ever we leave the listener to make their own links and interpretations.

We’ve been helped in particular by two absolutely amazing musicians. Pete Fairclough is a writer and bandleader in his own right with many releases to his own name and a CV in the jazz world which is second to none. His willingness to submit to Archer’s unusual studio methods and suggestions is a further testament to his patience and versatility. Gary Houghton plays with the BerlinSchool electronica masters Radio Massacre International, and his searing and soaring contributions both to RMI and to the songs on this CD mark him as a creative player of great beauty and power.


Finally, while I’ve referred to this music and being comparatively simplified, I also consider that some parts of this record are among the most unusual and creative I’ve made, and personally speaking, for me to work in the field of songform is a challenge I increasingly don’t always find any more in more abstract musics.