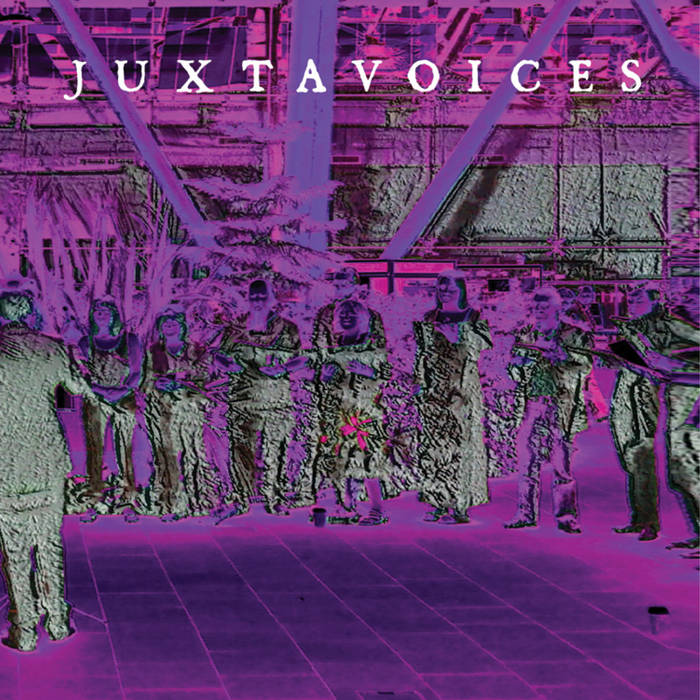 "Martin Archer has been throwing combinations of sonic stuff at sticky Sheffield surfaces since the late 1970s. Assembling the 30 singers of Juxtavoices in atmospheric locations, he channels their breathy extemporisations through texts by Samuel Beckett, Gertrude Stein and the venerable sound poet Bob Cobbing, who would have loved Juxtavoices' inchoate evisceration of Are Your Children Safe In The Sea? Here's a mass exorcism, a whole tribe talking in tongues, 30 full-moon were-Ligetis, and Wicker Man workings wrangled by the Swingle Singers." - Stewart Lee, SUNDAY TIMES


Suppose you invited thirty people to meet one Saturday morning to try out their voices and hear how they might sound together. That's what Martin Archer did in 2010 and out of that and subsequent meetings came Juxtavoices. Only a few of the thirty were experienced singers. They found themselves performing alongside musicians from the improvising scene and other genres, a few poets, visual artists and some less rarefied souls who also happened to find it an exciting prospect.

Juxtanother antichoir from Sheffield presents a repertoire developed over three years and performed in venues as diverse as a bear pit, a library stairwell, a disused steelworks, churches and more conventional concert settings. It includes arrangements of poems by singers Christine Kennedy and Geraldine Monk and others by Samuel Beckett, Gertrude Stein and the grandmaster of sound poetry Bob Cobbing, with solo and collaborative compositions by Martin Archer and co-director Alan Halsey.

Juxtavoices is no ordinary choir. It's not an ordinary antichoir either. You've probably heard nothing quite like them before. Nor, they'll assure you, have they. 'Precisely what art should be: challenging, reflective and dislocating. Voices struggling to articulate thought and emotion, whispered and screamed and seduced and accosted from nowhere' (Norman Paul Warwick).

Martin Archer says: When I first considered forming this group I knew it was going to be very different from anything else I’d done previously. I have a real horror of simply repeating and reshuffling previous ideas. At first, the idea was to put together just a handful of singers to perform the vocal parts on the Orchestra of the Upper Atmosphere CD (Discus 40CD). It quickly became apparent that the idea of forming a large choir could go way beyond the initial brief, present challenges I’d not dealt with before in music, and fulfil a dream I’d had for some while to work with multiple voice textures. However, one of the main reasons why the idea was attractive appears quite odd in retrospect. That is - until now all my music has either been made in the studio where I can micromanage every atom of every sound, or on stage in the safe company of highly skilled players. Juxtavoices was clearly going to be neither of those, and it was the sheer inability to control the music fully which actually appealed to me. Call me perverse for that. I’ve always incorporated an element of randomness into my works – with this group the randomness would be simply inevitable. The surprise has been the collaborative aspect of the group, joining with old friend, the writer Alan Halsey to co-direct, the joy of workshopping new pieces, the sheer FUN of such a large and unruly group, many of them strong creative voices in their own right in a variety of art forms, and finally the fact that this has been a group which has been able to make so many live performances – 24 to date - in a relatively short period. When I designed the artwork for this CD I deliberately wanted to show through use of gig photos that Juxtavoices is a real performing group of real people, and not a mere studio construct – that factor is very important to me. Finally, although I’m never usually given to stage nerves, this group puts me right on the spot, and even before a rehearsal I occasionally find my heart in my mouth. You don’t get 40 people out of bed on a Saturday morning only to waste their time…..