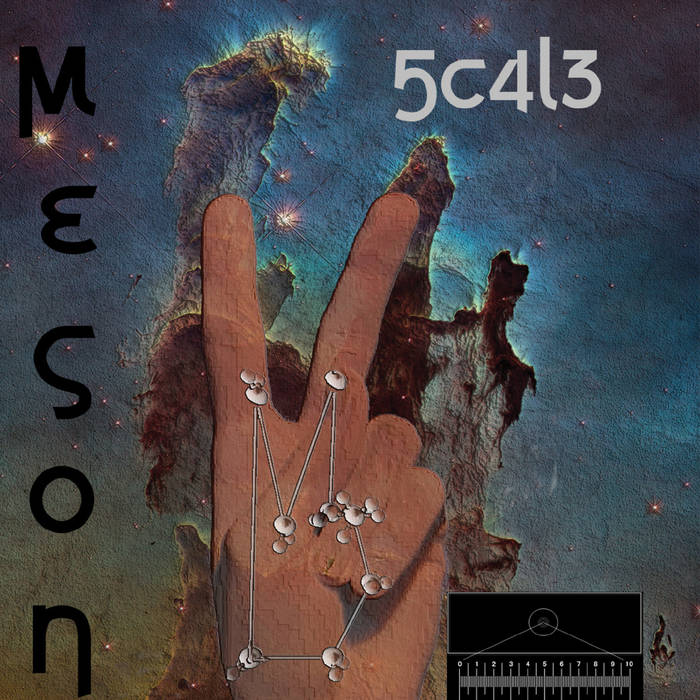 "Musically this album rises and falls on waves of cosmic radiation, attaining a quality akin to a Deutschrock version of Hawkwind. Violins, synths, reeds, electronic treatments and standard rock instruments from a cast of 14 combine with Bo Meson's distinctive words for an atmospheric but highly unusual whole." - ROGER TRENWITH, ASTOUNDED BY SOUND


Meson are a floating group of improvising musicians under the misguidance of Bo Meson who fails to impose disorder. All of our music is improvised, setting the scene for Bo's 'thoughtful' words.

How you categorise it is anyone's guess. Ambient? Ambidelic? Free-form? Improg? Make your own mind up, we prolly won't object to your preferred label! We aim to play thoughtful music, with extensive use of dynamics and rely on our own musical intuition and personal empathy to determine the length, style and structure of the piece.

What appear, with a jazzy sax and 5:4 guitar riff, to be several false musical starts to the album '5C4L3' are reinforced by the equivocation in the quasi-legalese first lyric (in the first track - 'Meson's Unauthorised Autobiography') “By hearing these words your consent is implied to the following...”, presaging some of the continua of objective and subjective scales that will be explored in the album.

Most tracks slide into one another via slo-fi sitar that is both hugely slowed and sampled at an extremely low rate to give a subterranean quality to the odyssey.

The second track, 'Dark Matters', starts with a fiddle- and melodica-driven rhythmic funk groove – an interaction, in thematic terms, between an AI-equipped space probe (searching for Dark Matter) and the next probe in sequence towards its' originator's home-world (Earth). The probe (as with 'Bomb 20' in the film Dark Star) is not entirely constrained by the original programming and has plenty of time to consider the lack of mass in the observable universe and the lack of meta-physics mixed into the physics imagined by humanity – hidden depths across many dimensions!

The next stop in the album's transversal of scale features the classical organ sound summoning the heliocentricity of 'Kem-Na Mazda' an ode to the Solar object that allows and powers our life – sung by Wolfgang, a classically trained singer of Leider.
'We Traffic in Progress', the fourth track, is a swirly sci-thesis that refers to the relatively recent notion of progress in its' current form – a reading that I owe to Robert Nisbett – but equates atomic scale objects with solar scale objects to derive an entirely different notion of what should be important in the physical sciences – ie scale rather than circularly defined constants, although somewhat tongue-in-cheek this theory is internally consistent and parsimonious.

Track five, 'Advances in Destruction by Technology', relates to the MIT Technology Review that talks of the financial implications of the adoption of AI leading to mass job losses among professionals (rather than lower skilled jobs) but also to the Zerstörung durch Fortschritte der Technologie manifesto. It is a gentle, acoustic, bazouki and guitar song.

'Scale' bemoans, with a serialist bassline, the lack of opposition to moral capitalism, asking whether this is not an example of the 'naturalistic fallacy' and features brief quotes from Eliot and about Rimbaud.

The seventh track, 'Beware the Signals', has a horn-lead distorted drum groove featuring processed guitar and bass and an increasing intensity towards the fade. In this song an AI unit considers whether human life is constituted by a single physical body moving through time or by electro-magnetic signals in the brain and nervous system that could be transmitted to another body. As the song progresses the unit experiences increasing signal degradation and takes an almost religious comfort from that fact.

'Groovy World', a clockwork tribal sensibility's hypnotic groove, is an instrumental palette cleansing musical sorbet dedicated to the shallows of the notion of time's arrow.

'Thing A' is the last track and fully articulates, in an atomistic logical form (highly suggestive of Wittgenstein's Tractatus) the method for using the scientific approach suggested by the previous tracks of the album. The juxtaposition between the fuzzy organ and octave-shifted (bass-like) guitar is intentionally grandiloquent pointing out that anyone who tells you THE truth will lie about the big stuff too!